In May 2009, I conducted a study on the population estimate, habitat preference and breeding success of the seabird, White Terns, gygis alba in Feydhoo, Addu Atoll as part of my thesis.

White Tern, locally known as Dhondheeni, is commonly found in all the islands of Addu Atoll, the southernmost atoll of the Maldives. Addu Atoll, with its twenty three (23) islands, provides an important habitat and breeding site for this seabird, which is considered as the pride of Addu Atoll.

However, there are no known records of any accurate published data of the population of White Terns in Maldives. There for a preliminary status of the population, preferred habitats and breeding success of this seabird is of utmost important, which would enable in understanding the levels of threats posed to this bird the Maldives.

I, therefore, for the first time studied the abundance of White Terns in Feydhoo Island, identified the habitat preference, and observed the breeding success of this bird for the purpose of this report.

Here is the summary of my findings:

Bird counts were conducted in 10 habitat patches between May to July ,2009. Data were also collected to identify the species of trees most often used by this bird to nest and roost; and also to see if there is any relationship between features of tree (DBH, canopy cover, height, and dead and live branches (tree health) with the nesting and roosting preference. A breeding success rate was determined by monitoring the 30 nests of white terns, which also estimated the hatching and fledging success of white terns in Feydhoo Island.

Breadfruit trees were found to be occupied by more number of breeding and roosting birds than mango trees. Terns preferred to roost and breed in trees which had a large DBH and height. Canopy and the amount of live or dead branches had no effect on the tree occupancy.

The total population of White Terns in S. Feydhoo was estimated to be 370 birds and 22% of these birds were breeders. White Terns produced an average of 0.57 chicks per attempt or the eggs had a hatching success of 57%. The probability that a newly hatched chick survives the entire 40 days of the nestling period was found to be 67%. Hence, this study determined that, about 38% of nests beginning incubation can be expected to survive through to the end of the fledging period.

This study has established the first preliminary population estimate of White Terns in S. Feydhoo. An important observation here is that, there is no evidence to suggest that the population of White Terns at S.Feydhoo may have declined or increased recently in the absence of previous systematic surveys, the reasons for any decline or growth rate are impossible to judge. 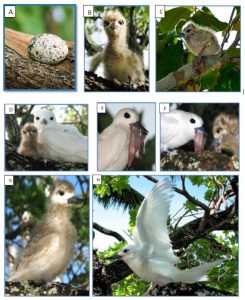 Figure: (A) A single white tern egg; (b) a newly hatched chick on a branch; (c) a week old chick; (D) chick with its parent; € the parent tern returned from foraging at sea with baby squids for the chick; (F) a chick being fed; (G) chick with white feathers emerging; and (H) the young tern about to fledge